Many Ambridge organizations once had bands. The photo below is of the Carpatho-Russian Band of Ambridge PA, from the collection of the late local historian William (Bill) Bowan in Laughlin Memorial Library's archives.

Addendum: After I posted the above information and photo, Carol Demchak Flanigan provided a newspaper clipping with the same photo that she says was published in the late '70s by the Beaver County Times as a "Looking Back" feature. Carol's grandfather, Roman Demchak, is in the photo.

The Times article provided some information about the band and identified all the members but one.

According to the article, Peter Pawlack organized the band around 1920 for Holy Ghost Orthodox Church--which still exists at the corner of 2nd St. and Maplewood Ave.--and said the above photo was taken "about 1925."

The band was active for 12 years and escorted the funeral processions of members of Holy Ghost to 4th St. and Glenwood Ave. The band then traveled with the procession to Economy Cemetery, playing "solemn" music on the way to the cemetery, but "lively" music on the return to St. Michael's Hall.

From left to right, the band members are identified as:

If anyone knows the identify of the remaining unidentified band member, let me know, and I'll add it.

Lorianne Stangl Burgess provided me with this wonderful photo! According to Lorianne, the group of young women standing in front of the window of the Ambridge Laundry were not laundry employees, but rather were suffragettes waiting for the beginning of a march down Merchant St.


The Ambridge Laundry once was on the east side of the 400 block of Merchant St. as shown in the postcard below. On Walter Wacht's Ambridge Reprise site, he says the postcard photo shows a 1906 suffragette march. I can confirm that the postcard goes back to at least 1906, because the one I own is postmarked October 1906.

I've been trying for many months to try to learn more details about any suffragette marches in Ambridge, but so far, haven't been able to find anything. The hunt continues!

Update July 14, 2016:  While so far, I have found nothing definitive to explain the nature of the march shown on the above postcard, I'm increasingly leaning towards its identification as a temperance, not a suffrage, march. Maria Notarianni, who oversees the Good Samaritan Parish Archives, says that the Archives' copy of the postcard identifies the scene as the "1906 Catholic Abstinence Unions Parade."

The May 28, 1906, Pittsburgh Press says that on the previous day, the Catholic Total Abstinence Union of the Pittsburgh Diocese had held a large temperance rally in Ambridge.

Walter Wacht recently gave me the source of his identification as a suffrage march. "The picture (where ever I got it) had the caption." So there are conflicting identifications of the photo.

Here's a photo of women leaving the Ambridge train station for the temperance march:


Typed caption: "Assembling of the temperance parade after the arrival of delegates from the Catholic Total Abstinence Union Pittsburgh Diocese. May 27th 1906."

Here's a photo of the arrival of men for the same march:

These five postcards are from the late Louis Vukovcan's collection. Thanks to Jackie Vukovcan for allowing Maria Notarianni to scan them and allowing me to share them here.

These postcards were generic, having nothing to do with Ambridge but the word "Ambridge." The postcard publisher would sell the same postcard in different areas, just insert another location in lieu of  "Ambridge."

I'm not sure when these particular types of cartoon postcards were popular. 1930s? I found similar cards online, but no era was given. Maybe someone with more knowledge of postcards can tell me. 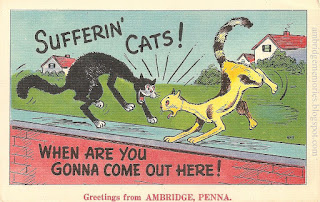 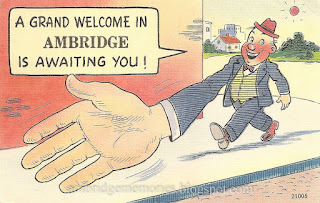 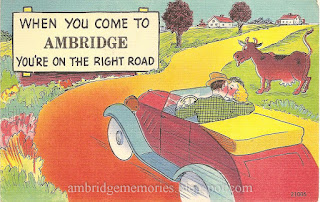 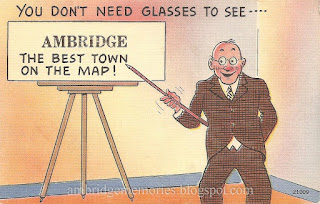 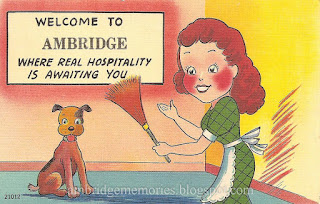