A Memorial Day past


The above photo is from the Memorial Day 1950 ceremony at the dedication of the doughboy statue in Ambridge's P.J. Caul Park, located on the corner of Merchant and 11th Streets. While the back of the photo says "Memorial Day 1950," so far, I have found nothing that might support that identification except the inscription on the plate under the statue.

[Update May 30, 2016: Although at the time I wrote this post, I thought the ceremony might be the dedication of the doughboy statue, I was wrong. The doughboy statue was not new in 1950; it was dedicated on Memorial Day 1930 at its original location near the Ambridge-Aliquippa Bridge. You can see a photo of it at its first location and read about the 1930 dedication ceremony in the May 30, 2016, blog post "Ambridge's doughboy statue dedication, Memorial Day 1930." The original base also had a plate. Perhaps the ceremony shown in the photo above was for the dedication of the new bronze plate on the statue's base? Or was the ceremony perhaps related to the statue's move to the park?]

For God and county, we associate yourselves together for the following purposes: to uphold and defend the Constitution of the United States of America; to maintain law and order; to foster and perpetuate a one hundred per cent Americanism; to preserve the memories and incidents of our association in the Great War; to inculcate a sense of individual obligation to the community, state and nation; to combat the autocracy of both the classes and the masses; to make right the master of might; to promote peace and good will on earth; to safeguard and transmit to posterity the principles of justice, freedom and democracy; to consecrate and sanctify our comradeship by our devotion to mutual helpfulness.
Dedicated in memory of the departed ones by Canady Hull Post No. 341, the American Legion of Ambridge, Penna.
May 30, 1950


The white building in the upper left of the black and white photo is the A&P that was located between 11th and Sherman Streets. Behind it, you can see the top of the H.J. Heinz building on Sherman Street. The old National Electric factory that once ran from 11th to 14th Streets can be seen on the right hand side.

The photo below shows the statue in March, 2014.


You can still see the side of the old A&P building, now the Trinity School for Ministry, in the photo, to the right of the statue.
Posted by Nancy Bohinsky Knisley, AHS '67 at 4:55 AM 2 comments

When I stopped at the rather unremarkable looking building at 462 Maplewood Avenue during a visit to Ambridge, it was to take a photo of the faded painted Coca-Cola sign on its south side.


I didn't realize until today that 462 Maplewood is of historic interest far beyond the sign.

I knew that Beth Samuel Congregation once not only had a synagogue at 463 Maplewood Avenue, now the location of the Maple Restaurant, but also that during the 1920s, the congregation had met in a building on the opposite side of Maplewood. But I didn't realize until working on the upcoming "Church/synagogue" list on my Ambridge List of Lists that it was in that building, 462 Maplewood.


And what's more, before Beth Samuel, the building was home to the Ambridge Library.

How many other ordinary looking Ambridge buildings have we walked or driven by, not realizing the importance of their history?
Posted by Nancy Bohinsky Knisley, AHS '67 at 4:38 PM 1 comments

The enormous success of Nationality Days from its opening morning on took everyone involved by surprise. The April 29, 1966,  Beaver County Times explained the popularity: "Never before in this area were so many different foods available within an area of less than a block."

Theodore Gaydos, the executive secretary of the Greater Ambridge Chamber of Commerce, which sponsored the event, described the turnout for the first day as "fantastic." He said, "Many people have told me this is the greatest thing ever to hit Ambridge." And as an event, it probably was.

Thousands came the first day and bought food from the booths. In fact, by mid-day, the crowds had bought almost all the food from a number of booths, food that was supposed to last the entire three days of the event.

That caught the groups running the booths by surprise. One worker said, "We had what we thought was a three-day supply of food on hand, but most of it was gone by 1 p.m." All of the booths ran out of supplies.

According to the Times, "Many women spent most of last night baking in order to provide fresh stocks" for the second day, when charter buses and a shuttle service were about to bring many more people from out-of-town.

Over its three days, the first Ambridge Nationality Days attracted around 10,000 people, according to a Times article about its 1967 sequel. No one was quite prepared for the amazing 1967 turnout either when 10,000 people showed up the first day.

Want a new kitchen now that you've been inspired to cook all those ethnic dishes you sampled during Nationality Days?

In case you felt the need to pick up some cement blocks during your Nationality Days visit:


If you have any money left after buying so much delicious food at Nationality Days, open a saving account!

Need a new bed or mattress to rest up after hours visiting the booths or dancing too many polkas?


If you don't need anything at Penneys, perhaps some meat from Penny?

Did you have a hard time hearing the Nationality Days music? 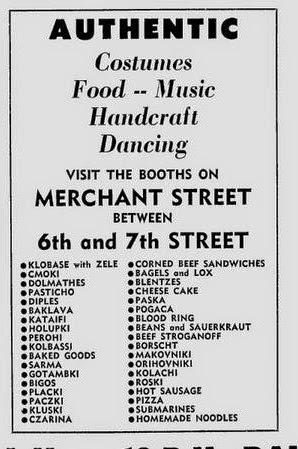 
I really like this photo of the northwest corner of the intersection of Merchant and 8th Streets, even though I don't know the year or the occasion. But who doesn't like a parade?

I didn't realize until recently just how many parades Ambridge once had every year. There were parades for the big occasions like Veterans Day or Labor Day, local events like the soap box derby or Nationality Days, and to draw attention to causes like buying bonds or supporting the United Fund.

Now that I understand how much planning and effort goes into planning a single parade every year, I am amazed at Ambridge's managing to host a parade, some of them huge, several times a year.

But there is another reason I like this photo so much: it's just packed with bits of old Ambridge:

But, as far as I'm concerned, a most intriguing and puzzling item in the photo is the sign for "RADIO STATION WRYO 1050 ON YOUR DIAL" on the Fritz Jahn building. WRYO was an 250 Watts AM Rochester station which existed from 1948-1955 (which helps date the photo). Why was WRYO in an Ambridge building? Was it a studio? An office? Does anyone know?

RADIO. STATION. W.R.Y.O.. 1949. Rochester, for a time, had a Radio Station. It began in 1949, with its transmitter tower located at Cleveland Avenue, North Rochester. It also maintained studios in Ambridge and Aliquippa.


The photo above shows the 500 block of Merchant Street looking north. The exact year of the photo is unknown, but the Mustang parked in front of Paul's Bakery puts it no earlier than the mid-1960s. The Christmas decorations on the light poles means the photo was taken before or just after Christmas.

The parking spaces are mostly filled, but there are only a few pedestrians in the photo, which seems odd for Ambridge at that time.

I couldn't see all of the businesses' signs in the photo, so I haven't been able to identify them all, but I see:

On the left, which is the west, odd numbered side of Merchant:

On the right, which is the east, even numbered side of Merchant:

For my ever-growing list of pre-1970 Ambridge businesses check my List of Lists.
Posted by Nancy Bohinsky Knisley, AHS '67 at 3:31 PM 4 comments