The children of Marshall Alley 1938

At the very beginnings of Ambridge, American Bridge built houses for the workers flocking into the town to work in the new steel fabricating plant. Among the houses were three rows of small, narrow, connected houses that ran a single block, from Merchant Street to Maplewood Avenue, close to the plant. Two of those three rows of houses faced each other on Marshall Alley, a narrow passage that ran parallel to First Street, which the third row of houses faced. Except for the houses at each end which were three stories, the houses were two stories with two rooms on each floor.

These homes originally were built for the laborers, the men who did the tough and often dangerous jobs in the plant, and their often large families. Later, the houses became home to people who couldn't afford to live anywhere else, although some residents remained long after they had the money to move away from the close-knit community that had developed. But even the people who wanted to stay were forced to move when the Marshall Alley houses were razed in the mid-1950s*.

Most of the people who lived in the area were immigrants from Eastern and Southern Europe, but former residents mention neighbors from West Virginia and Mexico.

The residents of Marshall Alley and the surrounding First Street neighborhood were featured in some of the most well-known photos of Ambridge, taken by acclaimed photojournalist Arthur Rothstein.

Rothstein was one of the photographers employed by the Farm Service Administration to document the hardships faced by so many Americans during the Great Depression. He came to Ambridge in the summer of 1938 and took a series of photos in the First Street neighborhood. Most of the photos featured the neighborhood children including one at their Dead-End Pool and several in Marshall Alley, among them this one. The actual title of the photo is "Housing conditions in Ambridge, Pennsylvania. Home of the American Bridge Company."

Wait! What?! My Aunt Helen? Turns out that my Aunt Helen (Sokolosky) Gause not only was in two of the photos, but she also was the person who had provided the names of the children now written on the Maple's copies of the photos. And the thing is, my Aunt Helen has enlargements of those two photos hanging in her house, and we had discussed them a bit. But she hadn't mentioned she was in those photos. Aunt Helen would have been 11 years-old at the time the photo was taken.

So right after I left the Maple, I walked the half block to my Aunt Helen's house and rang her doorbell. So now, thanks to my Aunt Helen, here are the names of some of the children photographed in Marshall Alley: 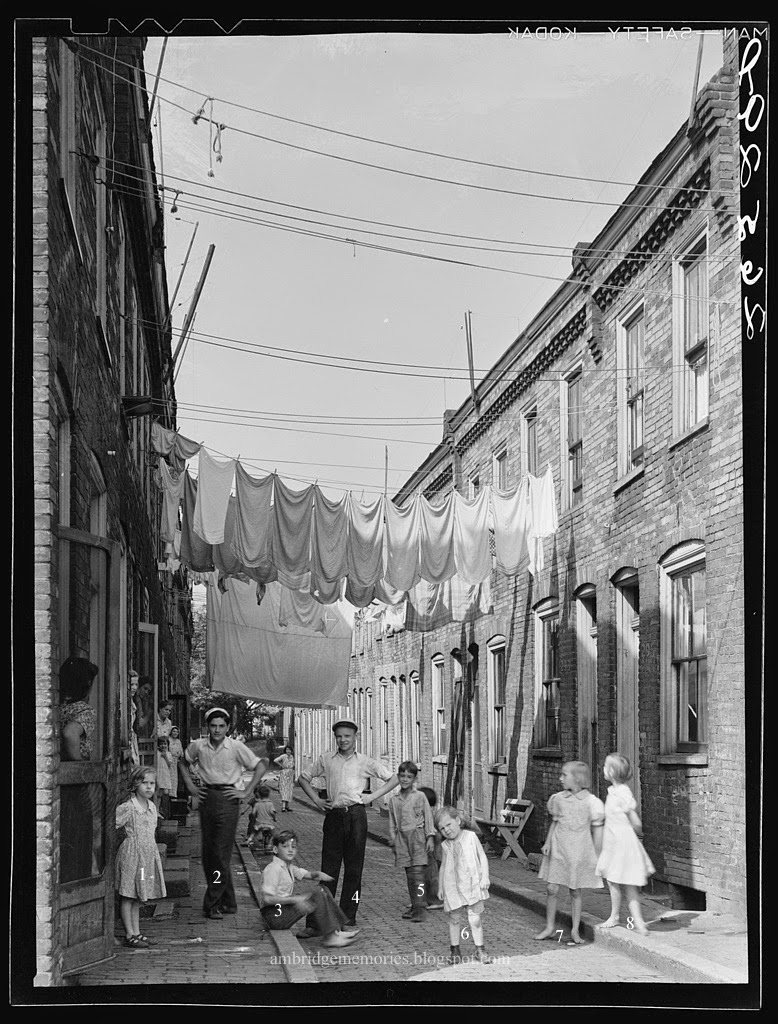 
If you can fill in the missing names, know the names of some of the people in the background, or want to correct a name, please leave a comment.

Update June 8, 2020: Two of the people in the background were identified in the comments to this post by an "unknown" commenter:

"Hi, I can name two other people in this photo. One is my grandmother Helen (nee Perman) Quinetand the other is my great grandmother Antonija (nee Belobrajdić) Perman. They are the older woman with child next to Jimmy Pappas's left side."
_____

Arthur Rothstein's collection of Ambridge photographs can be found online at the Library of Congress site or on Yale University's Photogrammar.

*As best as I can determine right now.
Posted by Nancy Bohinsky Knisley, AHS '67 at 3:59 PM