Here's a closeup view of the plate's center: 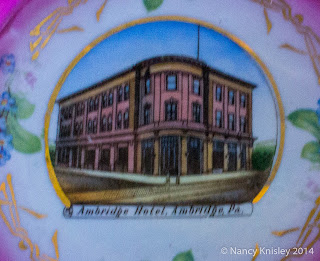 According to the information of the back of the plate, it was made in Germany for the Ambridge News Co.

However, the company was the publisher of many early Ambridge postcards. One bit of information about the business comes from the temperance march postcard in my blog post about the 400 block of Merchant St. It was published by the "Ambridge News Co., Horlick Bros.," which leads me to think the Ambridge News Co. was connected to prominent Ambridge newsdealer Steve Horlick.

Because the plate was made for the Ambridge News Co., and not the Ambridge Hotel, I believe it was made as a souvenir and not for the hotel's use. That belief is supported by other information on the plate's back: "Wheelock" was a major U. S. importer of souvenir china from the late 1890s until WWI.