Just a short distance northwest of the well-known and highly regarded Economy Hotel,* once located on the southwest corner of what is now 14th and Merchant Sts., there was a smaller, less impressive hotel. The Harmony Hotel, sometimes belittled as the "Tramp Hotel" or the "Hotel of the Unfortunates," hasn't been in business for many years, although its building still stands at 277 Fourteenth St.

Why those disparaging nicknames? According to Sarah Buffington, Old Economy Village curator:


"The guests at the Economy Hotel were told to arrive promptly at 4:30 for supper, so as not to keep others waiting. The staff was fed after the hotel guests, and then the 'tramps' were fed afterward. These homeless people were allowed to stay for one night, but were then told to move along. The Harmony Society kept track of them so that they wouldn’t overstay their welcome."

The date of the photo above is uncertain, but it probably dates from the late 1800s, before there was an Ambridge, or early 1900s. The building dates from much earlier, back to the establishment of Economy, and wasn't originally used as a hotel. Although it doesn't look like the typical, brick Harmonist house, it was the early home of Frederick Rapp, adopted son of George (Father) Rapp. Frederick Rapp later moved to a brick house that is on the grounds of Old Economy Village.

The three people in the photo are unidentified. but according to Buffington, the woman and girl may be Carrie Staples, a widow, and her daughter Katherine. Staples was a boardinghouse keeper there at the time of the 1910 census.

The photo below shows a recent Google Street View of the former Harmony Hotel building:


What is not visible from Fourteenth St. is a large addition--that appears to me to be at least as large, or maybe larger, than the original house--built on the back of the building, probably around the time it became the Harmony Hotel. Buffington said the addition "is very much set up like an old hotel." You can see the addition from Boyleston St. Here's a satellite view of 277 Fourteenth St.:

The other Harmony Hotel in Ambridge

To confuse Ambridge history more than it often is, there was another Harmony Hotel, across town from the one on 14th St. This Harmony Hotel, at 300 Merchant St., was built and operated later than the hotel on 14th St., but was also viewed as disreputable, especially by the American Bridge Co.

This Harmony Hotel was the bane of the American Bridge Co. for years. The company didn't want its employees drinking, and so devised deed restrictions that said that the area within the original boundaries of Ambridge was supposed to be "dry"--alcohol free--for 50 years. However, the Harmony Hotel, mere blocks from the company's plant and office, sold liquor. Legally. That was possible because the Harmony Hotel wasn't in Ambridge; it was in Harmony Township, at that time, just a walk across Merchant St. from Ambridge. Which I'm guessing made its site a very attractive spot for a bar...er...hotel.

The building shows up on the 1911 Sanborn Insurance map as the location of the planned "Hotel May," named for its builder. Sometime between then and 1915, the name was changed to Harmony Hotel. The battle between its owner and American Bridge Co. over the hotel's liquor license appears to have begun early. Here's part of the remarks made by F. T. Cadmus, the plant superintendent, from the Daily Times, October 22, 1915: 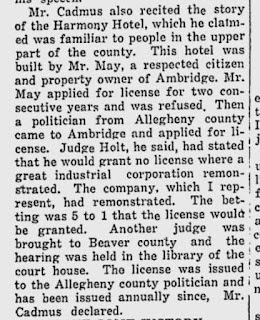 The liquor license battle continued in 1916 when the hotel was owned by George T. Davis. In an article in the Pittsburgh Post-Gazette, March 14, 1916, Davis' attorney claimed that the American Bridge superintendent, Cadmus, had warned employees of the company that they would be fired if they were seen in the barroom of the Harmony Hotel.

So American Bridge must have been pleased by this announcement in the January 2, 1917, Daily Times:

A "temperance hotel" may not have proved to be as popular as the barroom at the Harmony Hotel may have once been, because in 1920, Divine Redeemer Church, across Merchant from the hotel building, bought it and converted it into a parochial grade school. After the church built a new school in 1961, the building was sold to the Karnavas Vending Co.