I primarily liked today's group photo because it seemed quirky. I'm assuming that it wasn't routine for striking steelworkers to bring their young children to a picket line. It's from the June 5, 1952, Beaver Valley Times. 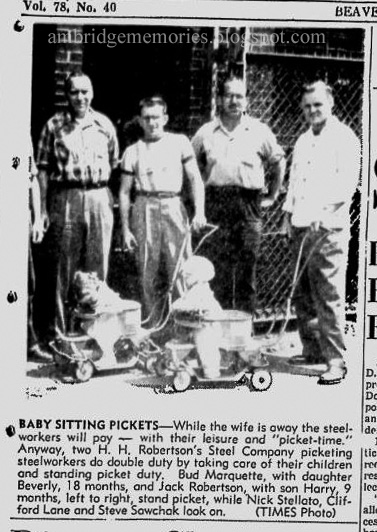 But once I reread the caption a few times, I realized that the photo was notable for other reasons.

First, the caption reflected the expected childcare responsibilities of the era.

It appears Nick Stellato was cropped out of the photo, but still listed in the caption.

The caption starts with the typical 1950's assumption that men only took care of their kids when their wives were "away," and as a result, the poor beleaguered men not only had to drag their kids to the picket line, but also had to give up their leisure time. Because men's leisure pursuits never involved their kids.

Then there was the importance of the strike itself, one of a number of strikes that took place in 1952. Around the same time the steelworkers went on strike, oil workers, telegraph workers, bakery drivers, and bakery and confectionery workers were on strike.

The nationwide steelworkers' strike was especially important because it started on June 2, 1952, the day the U. S. Supreme Court, in the landmark case, Youngstown Sheet and Tube Co. v. Sawyer, held that President Truman had no legal authority to seize steel mills. Truman had seized the mills in April 1952 to ensure the production of steel during the Korean War.

The Robertson picketers must have felt being on the picket line posed no danger to their children and didn't expect the kind of violence that occurred during strikes in the 1930s, including the 1933 strike in Ambridge that resulted in a bystander being killed by sheriff's deputies, and others wounded or clubbed.

But the mood wasn't as peaceful only weeks before at Aliquippa's J & L, when a brief strike followed a lower court ruling that the president's seizure was illegal. The April 30, 1952, Beaver Valley Times described the scene:


For several tense hours on Tuesday night it was 1936 all over again...(the) only element missing from the reenactment of the dramatic labor-management struggle of the middle 1930's was the smack of clubs against labor skulls.

The steel strike lasted 53 days, ending only after Truman intensely pressured both sides to come to a settlement.

Finally, another special detail about the photo: the inclusion of Bud Marquette. Thanks to John Domansky, I knew that Ambridge resident Marquette was a highly regarded gymnast and gymnastics coach. The U.S. Gymnastics Hall of Fame calls him the "Father of Women's Gymnastics in the U.S." Among his students were two Olympians: Rochester's Judy Hult Howe and Cathy Rigby.
_____

Love those comfy metal strollers that were popular in the early 1950s. My family owned a similar one.
Posted by Nancy Bohinsky Knisley, AHS '67 at 3:21 PM