St. Mathias* Church, built in 1905, was one of the first churches built in Ambridge. Like two other early Ambridge churches--the Methodist Episcopal and Zion's First Evangelical Lutheran, the building no longer exists. But unlike the other two congregations, which continued in new buildings, the St. Mathias congregation disbanded without ever building a second church.

According to the Old Economy-Ambridge Sesqui-Centennial Historical Booklet, the congregation disbanded in 1932.

If the building looks familiar to those of us who lived in Ambridge in the 1950s or earlier, that's probably because the former St. Mathias Church building was bought by St. Mary Byzantine Catholic Church (earlier called St. Mary Greek Catholic Church) in 1940, and used by that church until it was razed in the early 1960s when the current St. Mary's building was erected.

St. Mathias Church was incorrectly identified as a 1906 St. Veronica's church in the book Ambridge by Larry R. Slater: 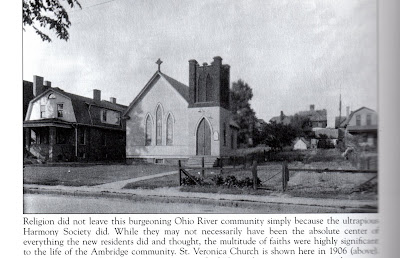