51st Anniversary of the JFK Visit - Part I 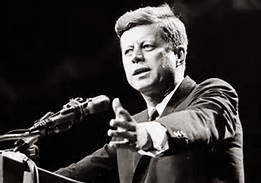 I remember standing with my brother Dave on Latimer Avenue in Ambridge waiting for President Kennedy.

It was a warm, sunny afternoon in October. We didn't have to go to school that day - it was the Columbus Day holiday.

Dad had dropped us off before going to work on the afternoon shift at American Bridge.

I wasn't aware that the President was coming. Word had passed through the steelworker locals to get out and greet the President's motorcade. I'm guessing that is how Dad knew.

Dad always voted Republican. Offhandedly, he asked us if we would like to see the President.

I don't know if Dave shared my enthusiasm but we both climbed into the back seat of the Ford.

The crowds lining Latimer Avenue would have satisfied the most demanding advance man.

We elbowed our way to the curb. There was a hush, then the growl of a hundred motorcycles. It was the cops, outfitted for the highway patrol: crash helmets with face-plates, white shirts, blue pants, and black boots. Jesus.

The motorcycles were followed by a parade of open Lincoln Continentals packed with politicians  - the Fourth of July had come on Columbus Day, 1962.

There he was - my hero, John F. Kennedy. He waved right at me. He was tan. He oozed the Kennedy vigor. He had charisma (just like it said in Time, Look, and the Saturday Evening Post).

Athletic-looking men jogged alongside the President's limousine, looking carefully from side-to-side. I had just turned 13 - I didn't realize until  later that they were Secret Service agents, dutifully guarding the President, who sat exposed and vulnerable in the open car.

In a moment, the street grew quiet. The motorcade had turned the corner and was on its way south on Ohio River Boulevard.
Posted by Robert Giles at 8:51 PM