It's in the Book 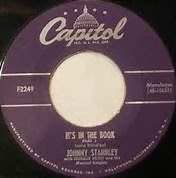 This remembrance is about Baden. It may be out of place here in "Ambridge Memories". I hope you will overlook that and read on.

As a child, I went to the Baden Methodist Church. That is where I was baptized, attended Sunday School, was confirmed, took communion, and joined the Youth Fellowship (MYF).

Two of my brothers met their wives and were married there, as was my older sister. A minister of the Baden Methodist Church officiated at the funeral services for my father and mother.

When I saw a picture of the old church recently on Facebook, it aroused many memories.

My brother Chuck has many gifts, among them a gift for comedy. He was in the class play at Highland School, where he played one of three suitors.

He was the reticent, bumbling suitor. His thin hair was parted in the middle and slicked down on the sides. He wore a dark baggy suit. He spoke in a high reedy voice. He was nearsighted. You get the picture.

Chuck was a ninth-grader. I was in sixth. Our class went to see the play. I laughed with everyone else when Chuck courted his lady love. He, breathlessly - "Yes, yes, yes." She, turning away - "No, no, no."

When the play was over, my classmates all remarked about how funny Chuck had been. I was so proud to be his brother.

A year or so later, Chuck had wowed them again.

The MYF was putting on a variety show to raise funds. Most of the acts were pantomimes of popular songs. It was amateurish to be sure, but so much fun. That was my sister and brothers up there on stage. Weren't they brave, and talented?

Linda and Jim performed "The Little Nash Rambler" with a few of their friends. They all pretended to be riding in a cardboard automobile. "Beep, beep. Beep, beep, his horn went beep, beep, beep."

The best was saved for last - Chuck.

An assistant started a phonograph as he shambled up to the pulpit, in the guise of an old time minister of the Gospel. He started with a sermon on "Little Bo Peep" and ended with the congregation singing an enthusiastic "Grandma's Lye Soap". (Members of the MYF sat in the background, playing the part of the congregation.)

Our pastor and his congregation didn't mind Chuck's satire. In fact he did a reprise of his act, by special request, for the Methodist Men.

Years later, in Trigonometry class, the teacher answered a question from a student, then thumped the text and surprised everyone by exclaiming, "It's in the Book." The teacher gave me a wink as if to say, "We know where that comes from, don't we Bob?"

Just this morning, I learned for the first time that Johnny Standley's comedy record was number one on "Billboard" in 1952, selling two million copies. You can hear it on Johnny Standley "It's in the Book".

It's more than a little cornball, but I hope you will enjoy it and have a few laughs with my brother and me.
Posted by Robert Giles at 4:31 PM