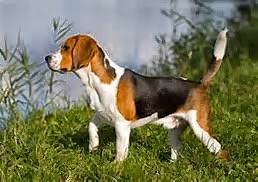 Pete Dinnerlein lived on the edge of Legionville Hollow just above the path we took into the woods. He liked to hunt. He had a beagle named Cody.

It was a July morning. My brothers and I were on our way to the other side of the hollow to pick blackberries.

I stopped at Cody's to say hello. As usual, he was chained to his doghouse.

In his fretful roundabouts, Cody had trampled away every blade of grass in the circle circumscribed by his chain.

In winter, he had a lawn of mud and ice. In spring, the lawn was merely mud. In midsummer, it was dry as dirt, which in fact it was. It was autumn that Cody lived for.

I didn't insult Cody by trying to pet him or scratch his ear. He was a working dog, and proud to be one. Pete had cautioned that affection would take the edge off his hunting instincts.

Cody made a sudden u-turn with his head and neck to attack an itch at the base of his tail.

His tormentor vanquished, he turned to me, as if to ask, "Why don't you hurry along and catch up with your brothers?" Cody let out a sneeze.

Suddenly autumn had come and Cody's long stretch of unemployment was over. Pete took him down into the hollow to exercise. Cody splashed through the creek. He chased squirrels up trees. He snapped at a dragonfly. He was a puppy once again. Rejuvenated. Reborn. Ready for the hunt.

Pete and his dog crossed Duss Avenue near the Legionville Bridge. Pete wore a red plaid jacket, green pants, and an orange cap. Cody, as usual, wore his tan and cream coat.

I ran to catch up. I didn't know if Pete would let me tag along - he never had before. Maybe I was old enough now.

Pete shouldered his shotgun. "OK, Bobby, you can come along. But do as I say. I would hate to accidentally blow your head off."

We walked along the roads of limestone slag that led through Byers' Field. There were a few stunted trees. Each one seemed to contain a red-wing blackbird, defending his territory. As soon as we stopped trespassing on one blackbird, we seemed to offend another. "Scold, scold. Keep out. Get going."

We crossed the Byers' railroad siding just at the top of the wooden steps leading down to the tracks of the "Pennsy". Beyond was the Ohio River. (The final stretch of Route 65 had not as yet been cut through to spoil the view.)

We didn't go down the steps. Instead we walked along the siding north toward Baden.

Cody had run off ahead. He stopped and snuffled the air on both sides of the track. Then he was off into the high grass to the east, his shoulders low and his tail erect. We watched the tip of his tail until he disappeared entirely.

The air was crisp, the sun was bright, a 20-gauge, a good dog, warm clothes, rabbits in the grass. Who could ask for more?

"He's on to something." Cody had let out a single sharp bark. Pete added evenly, "He'll turn it toward us in just a second. Stay back. Get out of the way. Now!"

About 40 yards away, a rabbit burst from the weeds. After him came Cody. He no longer wore an air of intent concentration. Somewhere in the grass, he had exchanged it for an air of noisy exhilaration.

He was level-headed enough to give Pete room for a shot. He had felt the sting of shotgun pellets once too often.

I heard a bang from Pete's gun. The rabbit tumbled toward us, moving forward even in death. He lay at our feet.

Quickly, Pete wielded his knife. In a moment, the insides of the rabbit lay on the ground, steaming in the cold air.

The dog had pined for this reward. He had earned it. Now it was his. The steam vanished.

Pete put the gutted rabbit in his bag and tied it to his belt. By then Cody was off in the brush looking for seconds.

One dead rabbit, one happy dog, one fine morning in small game season.
Posted by Robert Giles at 11:56 PM